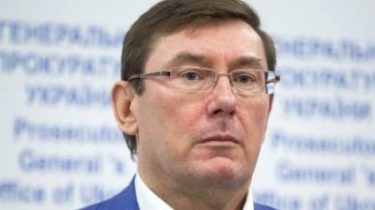 According to the results of the examination, the projectile came from the militants, “LDNR”.

The murder of 15-year-old girl Darya in the occupied territory of the Luhansk region was attacked by Russian mercenaries, which proves received by the Ukrainian security forces situational awareness.

This was stated by Prosecutor General of Ukraine Yuri Lutsenko during a briefing on the operation to re-enactment of the murder of Russian opposition journalist Arkady Babchenko.

“Can’t wait”. Babchenko told about details of the RAID on his “murder”

“We, the prosecution, today offers a situational awareness of how terrorists are discussing who shot 15-year-old Dasha. Yesterday we published the result of examination of the scene, which clearly indicated to the examination that the projectile came from terrorists. Today we have had the intercept,” he said.

We will remind, the tragedy occurred in the village of Iron, near Turecka, where the girl was staying with her grandparents. Daria studied in the 9th grade and only four days before the fire, celebrated a birthday.

Police have classified the death of a schoolgirl in the Iron during the shelling as a terrorist attack.