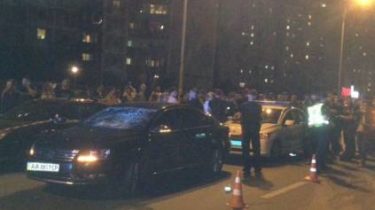 In the AP deny the participation of the car of the motorcade incident.

In the Administration of the President of Ukraine are denying that the car of a train of Petro Poroshenko knocked 13-year-old child.

“This is not a car from the motorcade of President”, — said the head of information policy Department of the AP Andriy Zhigulin in comments to the Public.

Police in Kiev said that the accident occurred involving a police car, which had fulfilled a special task. In the car were two police officers. In the presence of citizens and witnesses they passed the test “Drager” and the device showed that the police did not consume alcohol.

In addition, law enforcement officers bring to the doctor-psychiatrist to take biological samples for study on the establishment of the state of intoxication.

Upon road accident the criminal proceedings, on the scene works investigative team, the staff of regional Prosecutor’s office and Department of homeland security.

The boy who was hit by a car, was admitted to the hospital.