Dozens of shelling, snipers and heavy weapons. The situation in the area of environmental protection at the Donbass 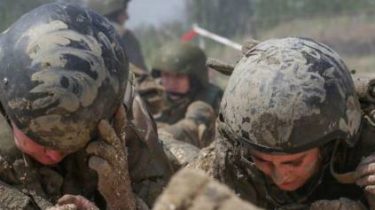 Dozens of shelling, snipers and heavy weapons. The situation in the area of environmental protection at the Donbass

During the day, 1 June, militants armed gangs “DNR” and “LNR” in the Donbass 33 times shelled strongholds of the Ukrainian troops.

Near the Crimean in Luhansk region and on Gorlovka direction, the terrorists used small arms, but their firing points were suppressed by the forces of OOS. Near Avdiivka and other towns by the Ukrainian military led fire of enemy snipers. And near Chermalyk, Pavlopol, Shirokino and Pro-Russian gunmen used heavy weapons – artillery caliber of 122 mm.

During the day the terrorists three times used heavy weapons against the forces of OOS. Due to the attacks ukrainskoi wounded one soldier, three militants were killed, two – wounded.

It is also noted that on Saturday, June 2, at six in the morning militants fired KPVV Mayorskiy. Victims of attacks there.

We will remind, in the river in the regional hospital named after Mechnikov from the received wounds in the Donbass died two Ukrainian soldiers.