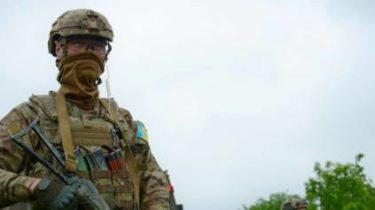 No details have not yet been reported

The soldier, who went missing on may 27 after clashes with militants in Mariupol direction, returned to the unit.

This is reported in the headquarters operations of joint forces.

The message the Soldier, who went missing during clashes on may 27, in the direction of Mariupol, and with whom communication was lost, returned safely to his unit.

Where all this time was a military, not reported. And also there is no information about his condition.

Recall that in certain areas in the area of environmental protection continued intense fighting. Active defense positions by units of the United forces did not allow the enemy to improve the tactical position. Foreign troops were active in the defense and gave an adequate response to the enemy. Tense situation remains in the areas of the settlements krymske, Novotoshkivske, Avdeevka, Marinka, Chermalyk, Shirokino.

A briefing by the representative of the press center of the combined forces 03.06.2018 G.

Over the last day, 2 June, the situation in the area of operations of the combined forces remained difficult and controlled. #OOS #operates #briefing In certain areas and continued intense fighting. The Russian occupation troops 28 times violated ceasefire 8 times used Minsk agreements prohibited weapons. Active defense positions by units of the United forces did not allow the enemy to improve their tactical position. Foreign troops were active in the defense and gave an adequate response to the enemy. Tense situation remains in the areas of human settlements Crimean and Novomoskovsk, where terrorists continued to fire on human settlements with the aim of causing losses among the civilian population. The militants used artillery caliber of 122 mm and mortars. Decisive and skillful actions of divisions of the combined forces of the firepower of the so-called representatives of the “Luhansk people’s militia”, who fired on the civilian population, was discovered in time and crushed. On the Donetsk direction in the area of human settlements Avdiivka and Marinka, the enemy resorted to the intensification of hostilities. The object of enemy fire once again began working teams, which are trying to restore the Donetsk filtration station. The enemy fired mortars 82 caliber and small arms. After the intervention of representatives of the OSCE, militants from the Russian-terrorist groups suffered a fire on the defenders of the Town. So, it was noted the use of three sniper pairs, which treacherously opened fire on the defenders of the mine Butovka and Avdiivka industrial area. Near the town of Avdiyivka, Donetsk region, in the area of operations of the combined forces, during combat duty on the front line, received a bullet wound the commander of a separate mechanized brigade senior soldiers Dmitry Konovalov. The bullet landed in the limb of a soldier. Not leaving a comrade, he continued to fire to suppress the enemy firing points. Only after the battle Dmitry turned to connstruction who gave him first aid. Now senior soldiers Konovalov is in a military hospital in Kharkov. However, we inform you that yesterday, before his unit returned soldier, whose fate during the five days remained unknown after performance of a fighting task on Mariupolska direction. In connection with the prohibition of opening fire, the enemy intensified action sniper pairs. For the purpose of concealing attacks and causing losses in manpower divisions of the United forces. In particular, the enemy sniper pair is marked on ASCA, Kurasha and Mariupol directions. During the fighting over the past day three of our soldiers were injured and were hospitalized. The enemy continues to destroy homes and communal facilities of the village South, on the outskirts of Gorlovka, to intimidate local residents. Invaders carried out the attacks on southern incendiary ammunition. The combined forces make every effort to ensure the safety of the civilian population. So, yesterday was completed the continuous cleaning of the settlement from the explosive devices, which “kindly” was brought there from the mortars and artillery representatives of the “Russian world”. According to intelligence reports, over the past day, three invaders killed, three wounded. The crime situation in the area perform the tasks of the joint forces operation remains controllable. In the Donetsk region ensure public order during the historic festival “Wild field. The path to Europe”. The festival, which took place on the territory of the reserve “Stone grave” Nikolsky district, gathered more than a thousand people. The results of faithful execution of the duties of the service reinforced squads of the National police of violations of public order is not allowed. Control points of entry and exit continue to operate normally. For the last day on controlled Ukraine of the territory proceeded more than 16 thousand people and around 5 thousand vehicles. Sixteen persons permitted to pass through the line of demarcation. Yesterday, KPVV Mayorskiy, during the inspection of the car “Mazda” running a citizen of Ukraine, which followed from the temporarily occupied territory of Ukraine on the route Bakhmut – Gorlovka, border guard, together with the inspector of DFS, among the personal belongings with signs of concealment identified 4 means of spirits and 2 processors to the computer equipment in the amount of UAH 168 13. The goods seized and drawn up. Yesterday, soldiers of the United forces to ensure free work of the national energy company “Ukrenergo” Mariupol maintenance center during work at Kurakhovskaya TPP in the village of Marinka. Also delivered humanitarian aid from the charitable Fund to the village of the Luhansk. Thus, the situation in the area of operations of the combined forces remains under control. Foreign troops continue to carry out tasks as directed. Military-civil administration, law enforcement agencies are working normally. Glory To Ukraine! The representative of the press center of the joint force Lieutenant Colonel Victor Subic.