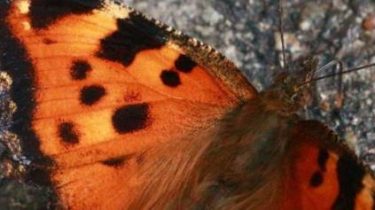 Scientists explained the reasons for the emergence of such a large number of insects.

Kiev may 4, observed on the streets a large number of butterflies — conceptof black and red.

Users in social networks started to share photos, interested in the reasons for the emergence of insects in the capital, writes Gromadske.

Listen, and what a fantastic phenomenon? Around the Hem of the butterfly, very much. I have only near the entrance of the fly pieces 20, if not more. Near the office in Isolation is the same story. Never seen that before

Sancevic black and red (Nymphalis xanthomelas) – the so called butterfly, which tens of thousands showed up today throughout…

Our museum has interesting group today! All area around museum occupied by batterfly! Today, the historical society Museum.

The head of the Department of the Institute of Zoology of the National Academy of Sciences of Ukraine Valeriy Korneev explained that in Kiev there were tens of thousands of butterflies, because 2017 was favorable for this insect, and in the spring of 2018 all individuals almost simultaneously laid eggs.

Caterpillar, which was more than in 2017, has evolved rapidly in may. Their pupae developed more than a week, and after the rain in Kiev on June 2-3 — the butterflies showed up.

At the same time, the scientist noted that overall in Europe and Central Asia entomologists see a catastrophic decline in the numbers of butterflies.

The exhibition in London (9 photos)

“Even in Irpen near Kiev, you will not see most of the relatively common species. Because of the unpredictable natural conditions, human impacts, in particular, the use of pesticides, ploughing and burning the grass, they irreversibly reduce their habitats and die,” — said the scientist.

But sancevic black-red is more stable than other types, easily migrates and everywhere can find food.

But in Russia, users are sounding the alarm due to the invasion of smelly butterfly.