Feigin said the only way to exit Sushchenko to freedom 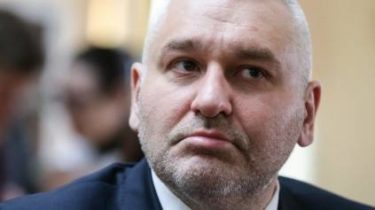 Feigin said the only way to exit Sushchenko to freedom

There is hope only for the exchange of criminals and terrorists from the Russian Federation if it will be beneficial to the Kremlin.

List of prisoners in Russia Ukrainian political prisoners added another name. The Moscow city court has sentenced to 12 years in a strict regime colony, the correspondent UKRINFORM in France Roman Sushchenko, says the story TSN.19:30.

It arrested at the end of September 2016 and since then was kept in the SIZO “Lefortovo”. FSB accuses Ukrainian espionage and calls by the Colonel of the main intelligence Directorate of the defense Ministry. He Sushchenko not guilty and stressed that he became a victim of provocation of the Russian special services. All sessions of his case was held behind closed doors, because if it were Russian state secrets, so to understand what exactly accuse the Novel, is quite difficult.

Videomouse the court announced the verdict of the Roman Sushchenko

The Moscow city court has sentenced to 12 years in a strict regime colony of the correspondent of “UKRINFORM”. The Kremlin has accused the Ukrainian journalist with espionage. Sushchenko pleaded not guilty and stressed, became a victim of provocation of the Russian special services. Lawyer mark Feigin believes that now return Sushchenko home is possible only through the exchange. Ukraine has offered the Kremlin to exchange Ukrainian prisoners: Kiev is ready to send Russian 23 of its citizens who are convicted of involvement in the fighting in the Donbas and the preparation of terrorist acts. However, Moscow is not yet interested. Now it turns out that the expression “no reserve” unique to Ukrainians.

As reported, President of Ukraine Petro Poroshenko said that condemnation Sushchenko the Kremlin makes the sentence itself. “The unprecedented cynicism of the Russian “court”, which on trumped up charges, sentenced Ukrainian journalist Roman Sushchenko, proves – Kremlin regime will stop at nothing in his attempt to break the spirit of Ukrainians”, – he stressed.