In Kiev the bus in the crosswalk brought down the woman, released a video 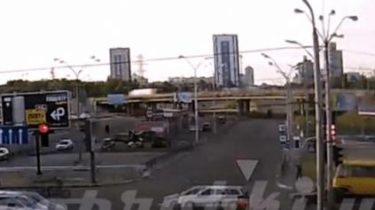 In Kiev the bus in the crosswalk brought down the woman, released a video

From the received traumas the woman died on the spot.

In Kiev Tuesday, June 5, at the junction of the Obolon and Stepan Bandera bus at the crosswalk to death I brought down the woman.

About it reported in a press-service of the Metropolitan police.

“The event information included in the Unified register of pre-trial investigations under part 2 of article 286 (Violation of traffic safety or transport operation by persons who direct vehicles) of the Criminal code of Ukraine”, – stated in the message.

According to the driver, he did not notice the pedestrian, when unfolded.

In result of road accident the woman died on the scene.

Now, investigators carried out forensic examination, but also seize the video surveillance footage to establish the circumstances and mechanism of the accident.

In turn, the service videoprobki has published on its YouTube channel a video of the fatal collision.

The record shows that the woman left on the roadway until the bus driver started to turn and ran over her.

We will remind, earlier in Zaporozhye the car at speed hit and killed a mother and child. The car went off the road onto the shoulder.

GU the National police of Ukraine in Kiev
,
Facebook/Kiev Operational