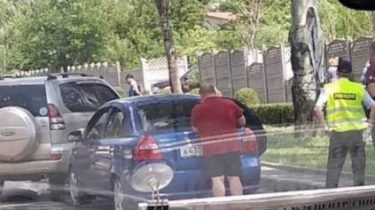 The death of the companion of the gunman, the man is in intensive care.

In the occupied Donetsk, there was an accident involving one of the commanders of the “army of DNR”.

Faced two cars and a motorcycle, at the wheel which was Vladimir Gaga with the call sign “Vaughan”, who headed the battalion “Sparta” after the destruction of the battalion “Motorola” (Arseny Pavlov).

This was reported by RIA Novosti Deputy Chairman of the operational command of the “DNR” Edward Basurin.

The man was riding a motorcycle and speeding. Vladimir Gaga injured, he was sent to the intensive care unit that he was alive. His companion died on the spot road accident.

In April 2014, the 24-year-old native of the city Donetsk joined the terrorist organization “DNR”, namely its departments of the power unit, which was stationed on the territory of Slavyansk and Slavic area.

The self-proclaimed “DNR”, “Sparta” after the elimination of the leader Arseniy Pavlov “Motorola” was headed by 23-year-old Vladimir Joga with the call sign “Vaughan”.