PEN-center, the U.S. sent to Putin demanding the release of Sentsov, sending a copy to the head of FIFA 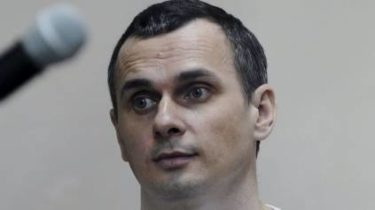 PEN-center, the U.S. sent to Putin demanding the release of Sentsov, sending a copy to the head of FIFA

American colleagues of the Ukrainian Director hope campaign in support of Sentsov during the world Cup will be a success.

PEN American center calls on the President of Russia Vladimir Putin the immediate release of Ukrainian Director Oleg Sentsov who has been illegally held in prison in Russia.

This was announced on his page in Facebook the journalist Sergey Parkhomenko.

“It turns out that today is exactly PEN American Center formally sent to the administration of the President of Russia the letter with the requirement “immediately and unconditionally release the illegally concluded the Ukrainian Director Oleg Sentsov. All last week under the text collected signatures, and he was posted on the website of PEN America”, – he wrote.

Appeal to Putin was signed by 58 writers, journalists and filmmakers in the USA.

“Staff from among those in the United States commonly referred to as “List A”, that is, celebrity first row, burdened by the most honorable regalia, awards, ranks, and which have the most significant influence on public opinion. Among them, for example, two Nobel laureate in literature John Coetzee, and Herta müller. And yet do such world-famous writers as Salman Rushdie, Jonathan Franzen, Ian McEwan, Margaret Atwood, Paul Auster, Daniel Handler (aka lemony Snicket), Francine Prowse, George Saunders, Alice Sebold, Art Spiegelman, Anne Tyler. In the list you can find singer Patti Smith, composer Stephen Sondheim, journalist Christiane Amanpour,” added the journalist.

Note, a copy of the letter will also receive the head of FIFA, Gianni Infantino.

“Now Russia is preparing to host the world Cup. In the coming weeks the world’s attention will be focused on this event in the country. Campaign in support of Sentsov will draw attention to the injustice of detention and dozens of other political prisoners in Russia…” – the authors of the letter.

Recall, 25 August 2016 the Ukrainian Director Oleg Sentsov was sentenced to 20 years imprisonment in a strict regime colony. He was accused in Russia of preparing to commit terrorist acts in Simferopol, Sevastopol and Yalta. May 14, 2018 Sentsov announced an indefinite hunger strike. The only condition of termination is the release of all Ukrainian political prisoners who are on the territory of the Russian Federation. On may 28, the Federal service of execution of punishments stated that Sentsov has agreed to supportive therapy. This information confirmed the Ukrainian lawyer Dmitry Dinze. May 31, Ksenia Sobchak said that he had a conversation video with Sentsov. He looked thin and pale, he dropped two teeth because of the hunger strike. Doctors who follow the state of health of the political prisoner, warned that after 30 days of fasting it will begin to fill in the nose the nutrient solution.

Earlier in the protection Sentsov spoke other famous cultural figures. In particular, the lead actor in the movie “Cyborg” Vyacheslav Dovzhenko called to value human freedom. “The most valuable thing a person has is life. Which Oleg is now in danger by stipulating to release all political prisoners who are there. I find it unacceptable in the XXI century, so we returned to the 30-th years of the Soviet system. We have no right to remain silent,” he said. And the singer, the leader of the group “Okean Elzy” Svyatoslav Vakarchuk called Oleg Sentsov conscience of our generation. “I don’t know you, Oleg, personally, but I dream to shake hands with you” – confessed musician.