In the night of the accident in Kiev hospitalized four people 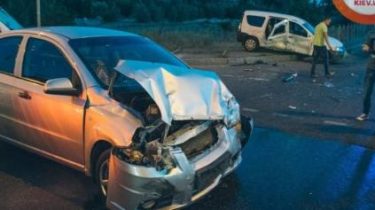 In the night of the accident in Kiev hospitalized four people

In Kiev on the night of June 10 on Poznyaky faced cars Renault Logan and Chevrolet Aveo.

The accident occurred at the intersection of Zdolbuniv and Grigorenko.

A fatal accident in the Kharkiv region: “BMW” I left on an oncoming lane and crashed into a police car

“According to the staff of the patrol police, Renault went on Grigorenko by the prospectus Bazhana and Chevrolet moved in Zdolbuniv from the street revutskiy. At the intersection of Zdolbuniv and Grigorenko cars collided. Both cars sustained serious damage. From hitting the Renault took off on the sidewalk”, – stated in the message.

It is noted that four of the injured in the accident were hospitalized. All of them were in Renault at the time of the accident. Also for medical assistance to the passenger of the Chevrolet, but hospitalization is not needed.

It is reported that the driver of the Chevrolet was driving on a provisional driver’s license, because he was recently convicted of drinking and driving.

We will remind, on Saturday, June 9, at the capital Victory Avenue near the metro station “Zhytomyrska” there was a triple accident involving two cars and a minibus №188. In the accident suffered by the passenger of Opel, it in a serious condition hospitalized.