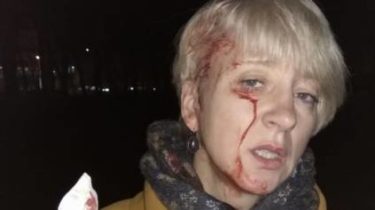 Larissa Golnik with a family understands what is signed.

With the emergence of Ukraine’s anti-corruption court pressure on judges will increase because you will be judged the richest and most cunning. So their security is hardly the main issue for the efficient operation of the court, says the story TSN.Week.

Larissa Golnik – judge of the Oktyabrsky district court of the city of Poltava. Possible candidate for the position of judge of the first composition of the anti-corruption court.

She is married and has a son. First education – historical. The second – legal. He worked in the Poltava regional Department of justice. Since 2002 works as an assistant to the Chairman of Appellate court of Poltava. 2010 – judge. However, for three years wore the robes and did not make decisions. In 2015 she waits until the President signs the order to her re-election indefinitely.

Powerful official, against whom judge Golnik – the mayor of Poltava Alexander Mamaia. In 2014, he was caught in a suspicious land deal. He gave his stepdaughter, and in combination the Deputy of the Poltava city Council, land 500 squares in the city centre on special rights. This meant significantly lower rents in the city budget than is usually paid by employers. But when we got to the court case came across unyielding Golnik.

“Was there a mediator who was trying to me about something to negotiate. And I also reported to law enforcement authorities, was carried out fixing crimes. Alexander Mamay realized something was wrong. He went to a press conference and accused me of extortion. Well, after that, of course, I had to satisfy the withdrawal itself,” she said

The case against the mother was closed in another court of Poltava. But after that, Golnik became an enemy not only for the mayor but for the Chairman of the Oktyabrsky district court, where he works. She constantly impose disciplinary violations. The most recent post in the social network. Formally this can be a barrier to competition in the anti-corruption court. However, the confrontation with influential officials is not limited to an official penalty.

In the summer of 2017, the car judges starts on the road to burn. The machine is completely consumed. The reasons are not established. In November of the same year she is attacked is unknown. Thanks to her husband, who spontaneously decided that night to meet my wife, the judge remains alive. The attackers could not be found. Proceedings were instituted under article “hooliganism”.

Despite the security, from the time he meets her husband. Igor is an archaeologist, taught at the local University, but remained unemployed. Now helping his wife with the courts. They, along with student years, both historians, both love to travel. Hiking – it is their holiday. My dream is to go on holiday abroad. Now their time together is a struggle with the system.

But there are still people who do not share the views of judge Golnik her father. “There is a lack of understanding of why I was in such a situation. This purely conventional position – you more than anyone should? Sat would not rock the boat and there would be problems,” said the judge,” she said.

Golnik not poor, lives in a house in the historical centre of the city. Tall ceilings – the dream of everyone. However, little in tRNA. Furniture decoration – books and various archaeological finds:

Most likely, the main challenge for candidates in the anti-corruption court will be that this work will have to go alone, but the whole family. The experience of other countries that went the path of anti-mafia and corrupt government, shows that relatives and friends will be the first target.

Videovista Poltava judge who went against the system, gathered in the anti-corruption court

In 2014 the mayor of Poltava caught in a suspicious land deal. When it came down to a court case, he tried to persuade the judge Golnik, so she closed the case. The woman told to militiamen, and the mayor found out about it, accused her of bribery. After this Golnik broke the car while driving, and then was attacked by unknown. But she still plans to become a candidate for the office of judge of the first composition of the anti-corruption court.