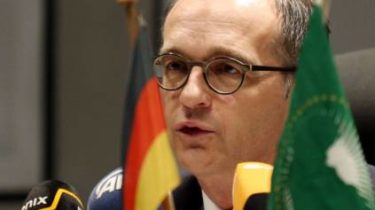 We will focus on the UN mission for Donbas

.The Minister of foreign Affairs of Germany Haiko Maas expects difficult negotiations during the next meeting of foreign Ministers “channel four” (Germany, France, Ukraine and Russia) in Berlin on Monday, June 11. About Maas said in an interview with Bild.

He spoke about the intention to discuss in future negotiations the possibility of placing in the Donbas peacekeeping mission of the UN. The German official pointed in particular to the fact that “the interests and positions of Ukraine and Russia in many areas” have significant differences. However, according to Maas, it should try its best to achieve a prolonged cease-fire, withdrawal of heavy weapons and improve the humanitarian situation for people in the Donbas who are suffering.

At the same time head of the German foreign Ministry said that the long absence of progress in the implementation of the Minsk agreements has complicated the situation for people in the East of Ukraine, “that nothing so much as peace”.

Recall, June 1, Haiko Maas at a joint press conference with Ukrainian counterpart Pavlo Klimkin in Mariupol announced the holding of the June 11 meeting of the foreign Ministers of Germany, France, Russia and Ukraine. Negotiations in the “Normandy format” on 11 June should be the first after 16-month break. The last meeting in the “Norman” format at Ministerial level took place in February 2017. In may , the heads of state and government of the “Norman Quartet” met in the German Aachen, the three of us. Then, during the meeting of the presidents of Ukraine and France Petro Poroshenko and Emmanuel Macron and German Chancellor Angela Merkel was not representative of Russia.