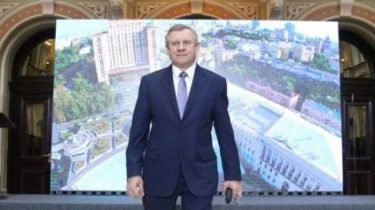 When inflation is high, monetary policy of the regulator will remain tight.

For the sake of strengthening the hryvnia on the currency market and improve the balance of payments of Ukraine in the medium term, should a real increase domestic production, and exports of goods and services.

This was stated by the Chairman of the national Bank Jacob Smoliy, writes UNIAN.

“If we are talking about the medium term, to improve the balance of payments should not a manipulation of the figures with the help of the hryvnia, and the real increase in domestic production and exports,” – said resin.

For transformations in the economy, important structural reforms, including to attract long-term capital in Ukraine, and one of the key in this area is judicial reform, the head of the NBU.

“The increase of social standards is all well and good, but to live really successfully and safely only at the expense of real incomes, which creates the economy,” – said resin.

“If we want someone who bought equipment, set up production, has implemented an infrastructure project, it needs to take control of inflation, otherwise no long-term, strategic investor will not come,” – said resin.

We will remind, the hryvnia at the official exchange rate in may, strengthened against the dollar by 0.5% in January-may was down 0.7%.

The state budget of Ukraine for 2018 implies an average annual hryvnia exchange rate of approximately 29.3 per UAH/USD exchange rate at the end of the year is about 30.1 UAH/USD.

According to the survey of the NBU in the first quarter of 2018, a majority of the representatives of Ukrainian business predict the exchange rate of the hryvnia to the US dollar in the next 12 months within 28-31 UAH/USD.

Historic low rate of the Ukrainian hryvnia to US dollar was fixed in February 2015, he made up 30.01 UAH/USD.

The national Bank adopted in may the decision to maintain interest rates at 17% per annum, as in the previous month.