Moscow insists that the peacekeepers can only “accompany” the OSCE observers along the line of contact.

The issue of UN peacekeepers in the Donbass was first discussed in “channel format”, however, the positions of the parties are completely different.

This was stated by Minister of foreign Affairs of Ukraine Pavlo Klimkin, writes UKRINFORM.

According to him, the parties had different understandings of the agreements in an absolutely different understandings of what should be the mission. The Russian side is “totally fake mission,” to create fake protection SMM; Ukrainian position: this must be a real mission with a real mandate for the whole of Donbass, which affects the situation (after all, “just going along with SMM”, makes no sense) that will gradually sort control throughout the occupied territory, which will have a real mandate, the mandate of the influence of the mandate on disarmament, jointly with the OSCE, control over the withdrawal of heavy weapons and its search.

The release of prisoners of the Kremlin and UN peacekeepers in the Donbas. What Poroshenko said and Trudeau

Russia’s position on peacekeeping missions Klimkin called “even worse” than it seemed at first: now Moscow is insisting that the peacekeepers can only “accompany” the OSCE observers along the line of contact in the occupied territory, but not able to do anything else.

Videosource supports the introduction of UN peacekeepers in the Donbass

In Istanbul Petro Poroshenko met with President of Turkey Recep Tayyip Erdogan and Minister of foreign Affairs of Turkey Mevlut Cavusoglu. The Turkish side stated that it supported the deployment of the UN peacekeeping mission in the occupied part of Donbass, and even ready to take part in it. 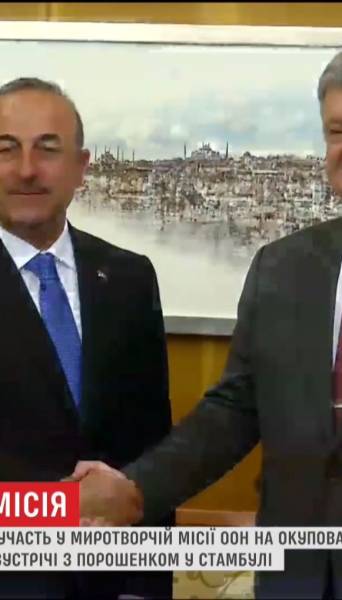 We will remind that earlier the special envoy of the US state Department Karl Walker has criticized the proposal of the Russian Federation regarding peacekeepers in the Donbas.