At the forefront were wounded two Ukrainian soldiers. The situation in the Donbass 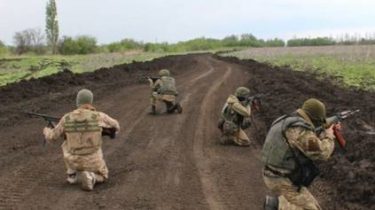 At the forefront were wounded two Ukrainian soldiers. The situation in the Donbass

The militants fired at all directions.

For Wednesday, June 13, in the Donbas the militants 14 times opened fire on Ukrainian positions in all directions. In nine cases out of the Minsk agreements prohibited weapons.

“In the fighting in the current day, two Ukrainian defender was injured. Enemy losses are specified”, – stated in the summary of the press center of the joint forces.

In Luhansk, the most active fighting continued in the area of Novotoshkovskoye, where militants used 122-mm guns and 82mm mortars. Also near Novozvanovka they used 82 mm mortars.

Near Water and Talakivka in the Mariupol direction militants attacked from 122 mm artillery and 120-mm and 82-mm mortars.

“The combined force opened fire in response and suppressed firing points of the enemy, maintaining the position of our units unchanged. Sniper fire and the occupants were in the area of settlement Krasnogorovka in the Donetsk region. Thanks to the skillful contraires events, the Ukrainian military quickly forced the enemy to cease fire”, – stated in the message.

Recall from the list of occupied struck out three settlements in the Donbass.