Groisman accused the police in the protection of smuggling, and the preparation of provocations against him and the government 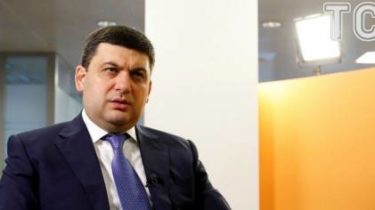 Groisman accused the police in the protection of smuggling, and the preparation of provocations against him and the government

The head of government stressed that the criminals wear uniforms.

The head of Ukrainian government, Vladimir Groisman said about preparing provocations against him personally and also against members of the government by corrupt police officers.

The Premier said at the Cabinet meeting.

“I would ask that I personally have heard today, all those who “protects” the illegal business, all those who “protects” the illegal smuggling, illegal import of goods on the Ukrainian markets. I emphasize that they now wear uniforms and are the current law enforcement system. I know what you are discussing my words and my positions on this issue, my steadfastness. I know that you are preparing a provocation against the Prime Minister, government and members of the government”, – he stressed.

Groisman also said that all law enforcement officers must serve the state and to fill state coffers.

“Not me, not someone else, and the state”, – concluded the Prime Minister.

Earlier, Groisman announced the tightening of the law on the protection of the business from abuse of officials and law enforcement officers, better known as “Maski-show-stop”.

“Abuse of authority – we are going to give their findings and will contact the law enforcement agencies to take personnel decisions in relation to dishonest employees. But there will be requirements to business – honest business, honest payment of taxes. This balance we must maintain,” he said