In Kiev “have kidnapped the businessman”: the police conducting exercises 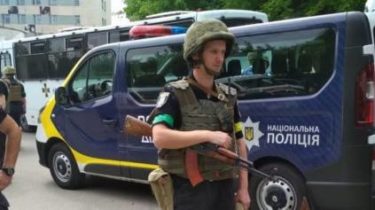 In Kiev “have kidnapped the businessman”: the police conducting exercises

The police have also urged residents not to panic.

Today, June 13, in Kiev, the police conduct exercises to practice operational actions in case of kidnapping.

It is reported, the police Kiev on his page in Facebook.

In Russia the driver and conductor kidnapped passenger

“Today in Kiev are police exercises. According to legend, the attackers, wounding the owner, took him hostage. Law enforcement officers work out appropriate operational plans to arrest the attackers and freeing men: involve all relevant services”, – stated in the message.

Today in Kiev are police exercises. According to legend, the attackers, wounding the owner took it in…

Law enforcement officers also called on Kiev residents not to panic and treat with understanding to temporary inconveniences.

Recall, June 1, Krivoy Rog , was kidnapped and shot and killed a man. In the Metallurgical area of the city between a group of people had a quarrel, after which several men grabbed his opponent and put him in Mercedes Benz Sprinter. In the van he heard two shots, after which the man was thrown out during movement of the machine. The victim was taken to the hospital in serious condition, but he died in the hospital.