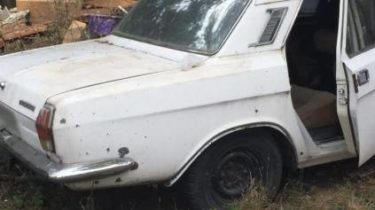 Militiamen establish that exploded in the old machine.

The explosion took place in Kiev in an abandoned car “Volga”, in which children have climbed to play.

This was announced by first Deputy head of the National police of Ukraine Vyacheslav Abroskin.

“Today, June 14, 16.42 police in Kyiv received a message about the explosion at the Chernobyl St. in Sviatoshynskyi district of Kiev. As a result of incident four children were injured and hospitalized, two of them in serious condition,” – said the militiaman.

According to Abroskin, the investigators found that four children aged 5 to 11 years old decided to play in the old car, which for a long time was parked near one of the houses, and climbed into the car, where he found an unknown object which exploded.

“All four children were hospitalized in the hospital “OKHMATDYT”, two of them in serious condition,” – said the Deputy head of the national police.

Now militiamen establish what exploded, and also all circumstances of incident and persons involved in it.

At the scene working investigative team of the police headed by the leadership of the capital dome and the bomb squad, and multiple teams of physicians.