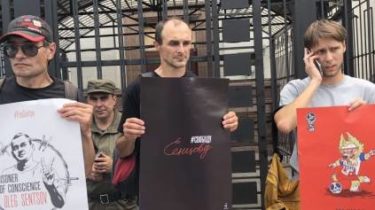 Oleg Sentsov is on hunger strike for 31 days.

Fund “Free People” and another two public organizations on the eve of the start of the world Cup in Russia held a picket of the Russian Embassy of Russia to demand the release of Oleg Sentsov and other prisoners of the Kremlin. The Ukrainian Congress Committee of America and other organizations of the Ukrainian Diaspora urged the international community in solidarity with Sentsova to resort to overnight fasting. The aim of the campaign organizers called to attract attention of the world to the starvation. and to tens of Ukrainian political prisoners illegally detained in Russian prisons.

Picket the Russian Embassy on the eve of the world football championship in Russia was organized by the Fund “Free people” with the support of the Youth nationalist Congress and the Union of Ukrainian youth. The organizers said that their statement demanding the release of Crimean Director Oleg Sentsov and dozens of other Ukrainian political prisoners from Russian prisons supported more than 20 public organizations. But the picket got a few – it was attended by 30 people.

Deputy head of the headquarters of the Foundation “Free people” Dmitry Zhmailo explained in an interview with DW that the action happened spontaneous and I was only a day. But he was encouraged by the fact that television and the press showed great interest in the picket of the Russian Embassy. “We do not expect that we will hear Russia, but we want the civilized world heard that Oleg Sentsov hunger strike for a month. We want people in other countries and the Ukrainian Diaspora put pressure on their governments, and those governments put pressure on Moscow to release Oleg Sentsov and all Ukrainian political prisoners who are illegally held by Russia”, – said Zhmailo.

Oleg Sentsov is on hunger strike for the 31st day. Directors and actors, artists and athletes have joined the TSN project in support of the illegal detainee. Today, the word from writer Yuri Andrukhovych. 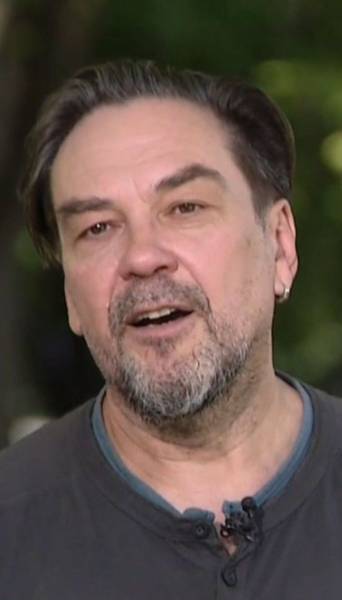 One of the participants of the picket in the name of Andrey has told DW that he is outraged by the intentions of the two channels to broadcast the matches of the world football championship. He intends together with his supporters to picket the offices of these channels and to require law enforcement intervention. “I believe that Russia did not deserve such a feast of football and will try to clean up its image of the aggressor and what she has done in the Donbass, Crimea and Syria. I urge all to boycott watching the matches of this championship and to advocate for the liberation of our citizens from Russian prisons,” said Andrew.

Some drivers of cars that drove by surrounded by barbed wire with metal shutters closed the Windows of the Russian Embassy, the signals supported by the picket. Rare passers-by on this side of the street stopped and reacted favorably to the slogans and placards of the protesters. “Such actions should be more. And need to report them, so people know and could come to support our youth. I wish I had not found out about this rally and saw it quite by accident,” said pensioner Maria.

Every minute of detention of Sentsov is a life – Kozlowski

International coalition for human rights announced the launch of the global campaign “Red Card Campaign – #RedCard4Putin”. During the world Cup in Russia over the next months activists intend to publish analytical materials and videos about the crimes of the Russian authorities. “This is an international campaign of pressure on Russia, demanding the release of political prisoners, including 70 Ukrainians, as well as to stop the military aggression, terrible human rights violations and continuous attempts to undermine the international rule of law”, – said at a briefing in Kiev the head of the International coalition on human rights and Vice-President of the Ukrainian world Congress Paul Rod.

He recalled that Oleg Sentsov is on hunger strike for 31 days and that one of the goals of the global campaign #RedCard4Putin – release him and other political prisoners. The campaign was joined by the world Congress of Ukrainians, which unites Ukrainians in 53 countries. Activists are planning a series of flash mobs in various countries. A lot of Ukrainians living abroad, have already declared private boycott watching the matches of the world football championship and we intend to encourage this to their fellow citizens.

Informed with the words of support of the political prisoner were made by the writer Sergey Zhadan. He said that the Director is starving not only for the release of political prisoners and for the freedom and independence of their country. Zhadan called for support for Sentsov in his fight.