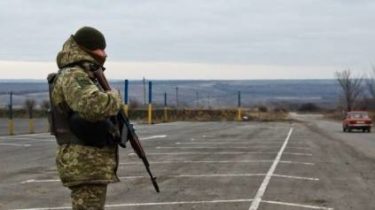 Item closed for the safety of citizens and prevent provocations from fighters.

They reported that on this day, all KPVV in the area of operation of the United forces began their work in a regular mode at 6:00. However, in 6:25 by the border guards on KPVV Mayorskiy learned that the militants have refused to permit persons who tried to cross the contact line in the direction of temporarily occupied territories of Ukraine, explaining this repair work.

The checkpoints in the Donbass will go to another work schedule

As noted, the representatives of illegal armed groups had not provided any advance information about it via monitoring mission of the OSCE and joint center for coordination and control over the ceasefire.

“For the purpose of safety of citizens and to prevent provocations from the IAF, the decision of the joint command post of the OOS work KPVV “Mallorcan” temporarily stopped”, – stated in SBS.

The Agency also said about possible complications when crossing the contact line from the temporarily occupied territories of Donetsk region.

“Units of the Donetsk and Lugansk regional management of the state border guard service has taken additional measures to enhance areas within the road corridor “Donetsk-Kurakhovo”, “Donetsk-Mariupol”, – frontier guards noted.

Before force of environmental protection has suspended the checkpoint of entry-departure “Marinka”. Mode “Red” at the checkpoint imposed in connection with the danger of provocations from fighters.