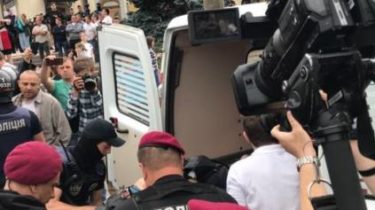 The man was hospitalized.

Probable enemy “Kievprayd” was able to break through the metal detectors to the venue of the March, after which he became ill.

It is reported by TSN correspondent Anton Strashko.

In Kiev because of the “equality March” the police have blocked the center of the city. People pass on passports

The man was hospitalized.

Subscribe to the page TSN live and join our stream from the center of Kiev, where the equality March “Kievprayd 2018”. It starts near the National Opera. To avoid collisions and provocations, the order of the day is to watch about 5 thousand police and military of the National guard.

In the morning a group of 150 opponents of the “Equality March” blocked the road route participants. Police pushed them to avoid provocations. Nationalists and representatives of religious communities, there were two clashes with the police. 56 people were detained.