Cherries from Kherson, Zaporozhye and Dnepr can go to China next year

What for Ukrainians an ordinary fruit for the Chinese – exotic! Our cherries can capture the Eastern market. On a tour of Ukrainian gardens came the Chinese delegation. To buy our cherries in the people’s Republic of want in the following season. So now look how to grow and store this exotic Chinese fruit, says TSN.12.00.

The farm in the Kherson region elite grown cherries. It is sold in Ukrainian supermarkets, export to Poland, but now targeting China.

What it is, the Ukrainian sweet cherry taste came from China’s phytosanitary service. First question – under what conditions the cherries keep and transportyou?

“Cherries are Packed in boxes right on the field,” – say in the economy.

In the garden the Chinese are asking – what the owners do with the branches after pruning, some fertilizer is used, what drugs poison the pests?

In China cherry – exotic. Its grown, but it is not enough. Therefore imported from America, Chile and Australia. And now for the cherries arrived in Ukraine.

On a tour of our gardens came to the Chinese delegation. Buy Ukrainian sweet cherry in the people’s Republic of China want in the next season. And now take in Ukraine, grow and retain this exotic Chinese fruit. 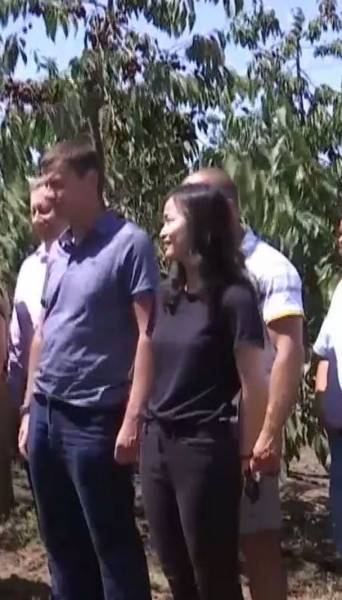 “We must agree on a Protocol, which must be prescribed all the requirements of the export of cherries to China. Ukrainian farmers have to adhere to these requirements,” – said the representative of the General administration of customs of China Fu Chang Bin.

To sell cherries in China are ready tomorrow, they say, Ukrainian entrepreneurs. Because the Chinese prices are very attractive. Even if you smuggle the fruits of the aircraft.

“In Europe, until about three euros per kilo. The Chinese market is 9-10 dollars per kilogram,” – said the Director of the Department Maxim Litvinenko.

And the Chinese say they are ready to conclude contracts with the Ukrainians.

“I saw and tasted many varieties of cherries. Personally, I really like,” says Fu Chang Bin.

To sell their goods in China has targeted six Ukrainian farms. On the shelves of Chinese stores cherries from Kherson, Zaporozhye and Dnepr can get next summer.