At the forefront of the militants wounded a Ukrainian soldier. The situation in the Donbass 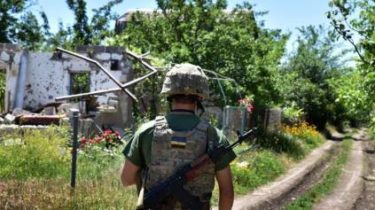 At the forefront of the militants wounded a Ukrainian soldier. The situation in the Donbass

For Tuesday, June 19, from 7:00 to 18:00 at the Donbass militants carried out four attacks on the Ukrainian positions. While one of them was wounded Ukrainian military.

“In the course of the day, June 19, the situation in the area of operations of the combined forces remains under control. Russian occupation forces continued to provoke the combined forces to fire in response to Gorlovka, Donetsk and Mariupol directions. It was fired from automatic grenade launchers, heavy machine guns and small arms. To prevent firing by the enemy, our units on the front lines opened fire in response”, – stated in the summary of the press center of the joint forces.

Meanwhile, the Armed forces of Ukraine once again recorded the presence of Russian military personnel on Donbass.