“We are finishing the transport system”: in “Ukrzaliznytsya” explained the distribution of passenger trains on the new classes 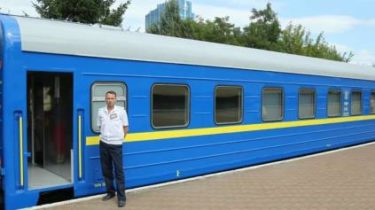 “We are finishing the transport system”: in “Ukrzaliznytsya” explained the distribution of passenger trains on the new classes

Ukrzaliznytsia is finalizing the new type with the classification of the train. This was announced by Deputy Director of the Department of passenger transport enterprises Alexander Krasnoshtan, writes UNIAN.

According to him, the railway tracks should appear the train class “comfort”, “standard” and “economy”. Ticket prices will be regulated in a different way. “In classes, “comfort” and “standard” we ask to be flexible regulation. It is possible to establish some limit the prices that we regulate tariffs. And in “economy”, it is really socially important transportation need government regulation,” – said Krasnoshtan.

Video”Ukrzaliznytsia” has launched a new service of catering in trains

While only four and in a test mode “Ukrzaliznytsia” has launched a new service train catering. The choice of the passengers – several types of first and second courses, sandwiches, cereal, desserts and drinks. Prices are average, for example, chicken broth is 38 hryvnia, mashed potatoes with chicken – 72 UAH. The representative of “Ukrzaliznytsia” said that due to non-market tariffs the situation is absurd, when it is easier to carry passengers “for free and not spend money on the collection and accounting of revenue, than to collect and count the cash”. “Now is actually the cannibalization of the transport system. We are finishing the transport system. The transport system has no resources for new blood. If it does not change in the next 2-3 years, we’ll just finish passenger rail service”, says Krasnoshtan.

The secrets of “uz”: which days the cheapest tickets for the trains

As it was reported, “Ukrzaliznytsya” may the commissioning of the train Mukachevo-Budapest, which will move to EUROPATAT, before the end of the summer.