Ukrainian fighters destroyed an armored vehicle and a truck of militants. The situation in the Donbass 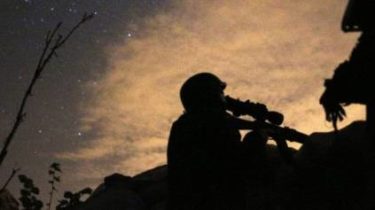 Ukrainian fighters destroyed an armored vehicle and a truck of militants. The situation in the Donbass

For Monday, June 18, on Donbass fighters 28 times opened fire on Ukrainian positions. In six cases of the heavy weapons.

“As a result of concerted action by units of the United forces, according to intelligence, the military destroyed one armored vehicle of the enemy and the truck GAZ-66, 5 occupants were injured”, – stated in the summary of the press center of the joint forces.

In the Luhansk region the militants have resorted to provocative actions in the area of Novotoshkovskoye, on Gorlovka direction in Verkhnetoretsky.

In the direction of Donetsk near Avdeevka and Experienced in combat, using small arms and rocket-propelled grenades wounded two Ukrainian soldiers.

On the Mariupol direction in the area of Starohnativka, Chermalyk and Lebedinsky fighters applied mortars – endangered civilians.

Night the current day, June 19, was held without the aggravation of the situation – the militants four times violated the ceasefire regime, without the use of heavy weapons. Losses among the Ukrainian soldiers there.

Meanwhile, a Ukrainian court has arrested Russian citizen who was detained with the identity of “the sniper of DNR”.