“No SEC”. At the Postal square, activists took control of the territory of scandalous construction projects 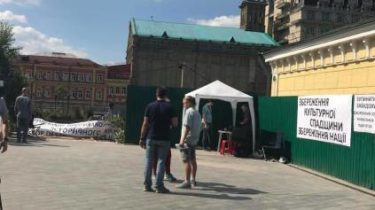 “No SEC”. At the Postal square, activists took control of the territory of scandalous construction projects

They are going to stay in place with tents.

At the Postal square in Kiev, the activists dismantled the gates and entered the territory of the controversial construction site, demanding to stop the construction of the Mall.

This was announced by activist Sergey Melnichenko.

“The requirement for public authorities is that the level finds the Postage should be kept by the state to have state funding, is the national property of the Ukrainian people and cannot be solved by any investor. No SEC. Only a Museum,” he writes on the page in Facebook.

Poshtova square is a shopping centre can build a Museum

He added that the activists are ready to put the tent under the houses of the mayor Vitaly Klitschko, the former head of the capital Oleksandr Omelchenko and other officials, if the contract with the investor is terminated and Mall construction is terminated.

Again the wind. This time at the Postal square,where the brazen developers decided to destroy the valuable artifacts.

Now the activists are going round the clock to stay on Post with tents.

We will remind, deputies of the city Council did not support the creation of a Museum on the archaeological excavations at the Postal square in the second reading.