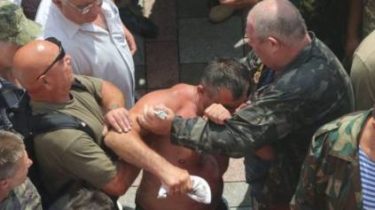 Law enforcement officers detained two participants of the storming of the Parliament.

Kyiv police opened two criminal proceedings on the fact of clashes near the Verkhovna Rada of Ukraine.

“Detained 49-the summer native of the Kirovograd area who resisted the police, to ensure law and order during yesterday’s mass protests on the Grushevsky street”, – stated in the message.

As noted, the event information is entered in the Unified register of pre-judicial investigations on signs of the crime provided by part 2 of article 342 (Resistance to representative of authority, employee of law enforcement Agency, member of public formation on protection of a public order and the state border) of the Criminal code of Ukraine. The sanction of article provides till two years of imprisonment.

Before the law enforcers also detained 26-the summer inhabitant of the Dnepropetrovsk region, which during the clashes used pepper spray against police officers. As a result, the law enforcement officers received a chemical burn of the eye. Investigators opened criminal proceedings under article “Threat or violence concerning the employee of law enforcement body” to the man threatens till five years of imprisonment.

Now the issue of election as the detainee of a measure of restraint.

We recall the morning of June 19, veterans of armed conflicts, most of them military-Afghans blocked the road near the houses of Parliament, blocking the government quarter. The activists demanded the restoration of benefits and have expressed outrage via social payments. Veterans were promised that their protest would be peaceful, but later went to storm Parliament. The protesters broke through the cordon and approached the building. Started the brawl, but to enter the building failed. People came out a few MPs.