The OSCE observers discovered in the occupied Donbas dozens of tanks, howitzers and military equipment of fighters 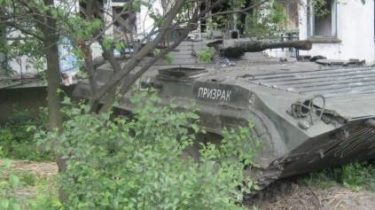 The OSCE observers discovered in the occupied Donbas dozens of tanks, howitzers and military equipment of fighters

Militants often prevent the implementation of the monitoring, not allowed on its military facilities.

Despite the agreement, the militants in the occupied Donbas are not withdrawn from the contact line heavy weapons.

This is confirmed by data from the Special monitoring mission of the OSCE, the Ukrainian side of the Joint center for control and coordination of questions of ceasefire and stabilization of the demarcation line (SCCC).

In particular, in the South-West from Lugansk (district of Bugaevka) found 18 howitzers of various calibers. In the same area and close to Simanovci in Luhansk – 32 tanks of various modifications.

In areas of Anthracite and Alchevsk found the movement of a column of equipment of fighters, at least 15 trucks. They moved from the temporarily uncontrolled crossing point “Dolzhansky” on the border with the Russian Federation.

“This shows usually about the next replenishment of the Arsenal of the militants with weapons, to carry out their criminal intentions on the territory of Donetsk and Lugansk regions. Cynical is also the position of the militants concerning the prohibition of access of OSCE patrols to military installations, located near the city of Donetsk. In particular, the categorical denials regarding the implementation of verification activities placement of weapons allotted to the observers of the Mission received from the militants in the areas of settlements Golmovsky and Markino. Their failure, they explain the implementation of the respective “orders of commanders” that are contrary to their previous pseudo-orders regarding the “prohibition of unreasonable restrictions on the freedom of movement of observers of the OSCE SMM in places of storage of the withdrawn weapons,” – said the Ukrainian side of the JCCC.

Militants unfavorable objective monitoring, because they are not taken with advanced heavy weapons.

“Such facts are further evidence of the disinterest of the leaders of the occupation administration of the Russian Federation in the objective monitoring of SMM OSCE of the situation in the area of operations of the combined forces, and an attempt to hide the lack of arms and military equipment in the places of their permanent storage in accordance with the Minsk agreements,” – emphasizes the Ukrainian side of the JCCC.