Anpc has completed a full scan of the Declaration Poroshenko 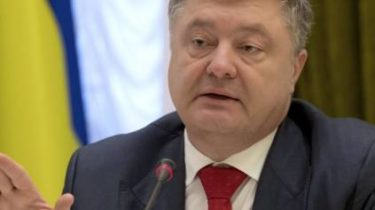 Anpc has completed a full scan of the Declaration Poroshenko

In the declarations Poroshenko and Zubko violations were found.

National Agency on corruption prevention has completed a full scan of the Declaration of the President of Petro Poroshenko to 2017, violations were found.

This is stated in the findings.

It is reported by sources “Ukrainian truth”.

As well found no violations in the Declaration of the Minister of regional development, construction and housing and utilities Gennady Zubko to 2017.

“The test is completed. In the declarations Poroshenko and Zubko violations were found,” – said the source publication.

The press service of the NAPC are unable to report test results, but noted that this information manifests in the coming days on the website.

As the press service of the NACP will be carried out full of verification of declarations for 2015 – 2017 of the people’s Deputy Vyacheslav Bohuslayev says (2017), MP Evgeniy murayev (2017), judge of the Svyatoshinsky district court of Kiev Taras Rabbit (2015 and 2016), Deputy of Poltava regional Council Alexey Porohy (2016), Deputy Mangusco of the regional Council Vladimir (2016).

As well as the senior operative of criminal police of Novomoskovsk in Dnipropetrovsk region Alexander Dodon (2016 and 2017), the leading professional of Fund of guaranteeing deposits of natural persons Ihor Gritsak (2016 and 2017) and inspector of the office of patrol police in the Kharkiv region Dmitry Vorovskogo (2017).

Validation of e-returns last 60 calendar days begin on the day of the decision.

“The decision to conduct full checks of the declarations of these persons made on the basis of information received from the subject of the appeal, on the possible reflected in such statements false information”, – explained in NAPC.

The Agency also decided to extend by 30 days a full scan of the e-declarations of the Deputy of Khmelnytskyi regional Council Andriy Hordiychuk, MP Denis Vasilenko, Deputy Minister of justice Denis Chernyshov, judges of the Supreme Court Alexander Podilchak and Chairman of the black sea of the city Council of Odessa region Valery Hmelnyuk.

Recall that in NAPC explained, making Gontareva to avoid responsibility for violations of the Declaration.