Thanks to TSN, there were holders of the rare Jacquot parrot 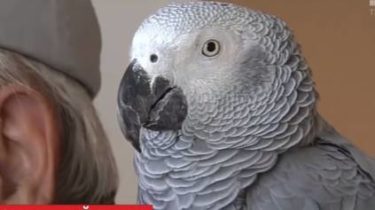 Thanks to TSN, there were holders of the rare Jacquot parrot

People did not expect to see your pet alive.

Parrot Jacko who was found in 30 km from Kiev, found a home thanks to the TSN story. Poultry spent in the countryside for two months, says the story TSN.19:30.

Parrot Vladimir found in the garden on the sink and took home. He fed the bird cherries and nuts, and also asked for help in to TSN to find the owners. After the story he began to write, even those who have lost parrots for a long time, as suddenly people from the same village said that their bird had disappeared two months ago. “Sent videos, photos – proof. And the number of the ring,” said the man who found the bird.

Videobiosversion of the prodigal parrot. The TSN has helped owners to find lost birds

Poultry two months spent in the countryside. Yesterday we showed the parrot the view of Jaco, which is found 30 km from Kiev and looking for hosts. It appeared, the bird disappeared two months ago. Zoologists say we were lucky, because usually, poultry without supervision die from dehydration. Helped to survive and even the size of a chicken, after all, little would have been pecked by the sparrows. About where the parrot came back, tells TSN. The owners have gone to pick up the parrot, not waiting until morning. “We immediately started flying around the house, remember we got him a cage,” say the owners of a parrot. They say he was sitting on the door, and when the owners carried water for the dogs flew away. The parrot’s name was near the trees, combed the village, but in vain – the hope that the bird survived, they say, was not. So when I saw your Doll in the news – incredibly happy. “Dolly is it. Because the first word was able to say,” the owners explained.

According to their observations, the parrot lost a little weight, became darker and less noisy. A family who found and gave the bird was invited to a barbeque at the weekend to thank for the discovery.