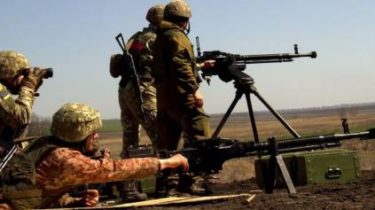 The enemy fired on Gorlovka, Donetsk and Mariupol directions.

Sunday, July 8, militants of the Pro-Russian illegal armed groups “DNR” and “LNR” in the Donbass continued to provoke Ukrainian military.

Terrorists carried out five attacks on Gorlovka, Donetsk and Mariupol directions. They used grenade launchers, heavy machine guns and small arms for the defenders of the South, Avdeevka, Shirokino and Lebedinsky.

As a result of enemy shelling on Gorlovka direction, one Ukrainian soldier was injured.

According to staff, the situation in the war zone controlled by the Ukrainian troops observe the silence and keep busy boundaries.

We will remind, for the last days fighters 13 times violated the ceasefire – none of Ukrainian defenders was injured. The enemy fired mainly with the use of rocket-propelled grenades, heavy machine guns and small arms.