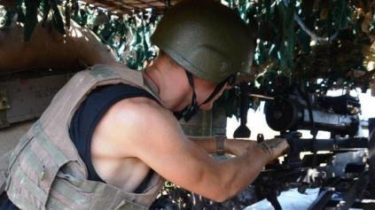 In the management of OOS are convinced that victory is possible, not only militarily, but also the struggle for the heart of the local.

The Ukrainian military, which are still only partially controlled village gold-4, moved forward.

Galina Olimpieva first asked the soldiers to hang a flag outside her house. According to the woman, it is her talisman. Now after liberation, local residents three days in a row sleep peacefully. Once the guns are silent, the military in the Golden went dentists and the utility. Sometimes to win the human heart better tractors than tanks.

“Victory will be given not only by military means, but also the conviction of the hearts of the local population. They convinced themselves, transmit to his family a line of demarcation. This brings our victory”, – says Alexander Golodnyuk, Deputy commander of OOS.

All four years of the war the government was powerless in the flow of contraband via gold-4. It was a Paradise of contraband trade with the occupier. Today closed all the way to the village gold-4. In order to restore the gold under the Ukrainian flag no casualties, it took a tactical maneuver. Ukrainian defenders gradually, like arms surrounding the village.

“The team came to clean up the gold-4, but not all, and some of the street. Then go for the gold-4, develop new positions,” – said the fighter separate brigade with the Callsign “Mars”.

The final night phase of the operation took place immediately. Taking control of the Golden – front debut of the company deep exploration, a completely new mobile division of the United Forces. It is designed for carrying out such lightning operations. This means that Ukrainian Gold achievements will not be limited.

“When we came, they (insurgents) a little push did, but we quickly extinguished, a small group of five or six people,” – said Oleg, Ledenko, the company commander.

But for a few hundred meters from the Russian, on the local school, hoisted the Ukrainian. Looks like the mother of a soldier who gave it to me, a school teacher, taught the son the right things. “This flag is dedicate to my mother. In order to have children in the local school in the heart of Ukraine”, – said the fighter “Major”.