Things to do in Russia: the writer-terrorist Prilepin throws the command of the battalion in the “DNR” 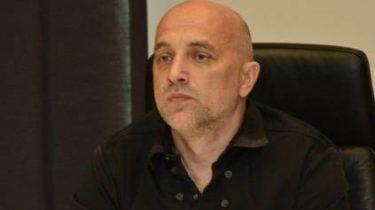 Things to do in Russia: the writer-terrorist Prilepin throws the command of the battalion in the “DNR”

His “position” he will leave in July.

The writer Zakhar Prilepin, who is at war on Donbass on the party of terrorists, has declared that leaves the post of “Deputy battalion commander of the army”, “DNR”.

He told about it in interview to the resources of the terrorists.

“This summer our battalion was transferred from the regiment of special purpose in the office of missile troops; now we rocketeers. The specifics are, frankly, not mine,” he explained.

In addition, in Russia for two years he supposedly “gather up a bunch of hovering and unsolved cases,” so in July he leaves “office” “Deputy battalion commander”.

Recall that in 2017, the SBU opened criminal proceedings against controversial Russian writer Zakhar Prilepin. To this Russian writer supposedly created on their own initiative the division, which, in particular, was going to conquer all of Ukraine.