Law enforcement officers may be accused of abuse of power.

The Kyiv Prosecutor’s office launched an investigation of the beating of police men at the subway station in Kiev.

“According to preliminary reports, a 23-year employee of the police Department in the metro GUNP in Kiev, while serving no clear need was applied against a citizen, who at that time was on the platform of the specified station, physical force and special means. The actions of the police on the phone’s camera took a casual witness”, – stated in the message.

In the Unified register of pretrial investigations included information on signs of abuse by the police authority or powers. In relation to a specified law enforcement officers will also conduct an official inspection.

The policeman, as seen in the video from the Network first baton vengeance hits lying man. When going around the audience, along with a cleaner pull the man along the platform, away from human eyes. What did the passenger of the Moscow subway, for which a police officer decided to punish him by force – on the spot – militiamen promise to tell soon. 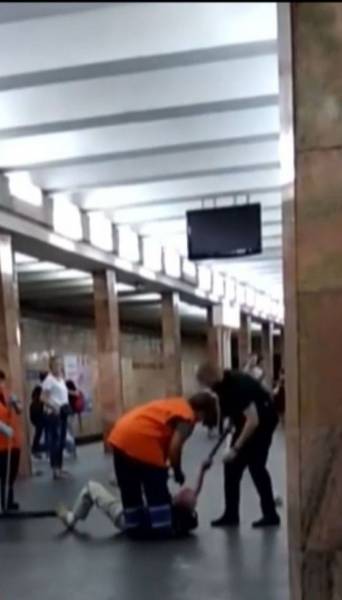 Recall that the network got a video beating police men at the subway station. Law enforcement officers helped one of the employees at the station.