Poroshenko wished the Tramp “back Putin into operation” 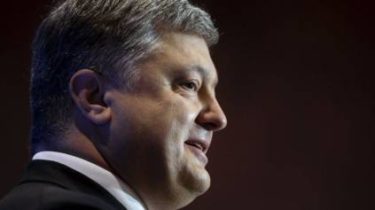 Poroshenko wished the Tramp “back Putin into operation”

The Ukrainian President recalled that the meeting between the two leaders will take place on the anniversary of the proclamation of the sovereignty of Ukraine.

The meeting of the presidents of the United States Donald trump and his Russian counterpart Vladimir Putin confirmed that Ukraine is at the forefront of European and transatlantic policy.

This was stated by President of Ukraine Petro Poroshenko, writes the Financial Times.

“We must make it clear that the values and principles of the free world will not be compromised… In Brussels this week, we shall realize that the price for Russia for its aggression will increase until, until you complete the Minsk agreement and will not end the occupation of the Crimea and the Donbass. It is time for concrete actions”, – he stressed.

According to Poroshenko, he wants Trump’s “success in its attempts to bring Putin in line.”

“Knowing the Russian President, I can bet that he longs for our destruction. But that’s not an option, and this will never happen,” – said the Ukrainian President, noting that Ukraine faces huge problems, “but now is not the time to ease the pressure on Russia.”

In addition, Poroshenko said that the meeting between trump and Putin will take place in the 28-th anniversary of the proclamation of Ukrainian Parliament state sovereignty.

We will remind, on July 11-12 in Brussels will host the NATO summit, which plans to take part the President of the United States. Earlier, Donald trump has criticized NATO allies for lack of financial contributions from many member countries of the Organization.

The meeting of the presidents of the Russian Federation and the United States will be held in Helsinki on 16 July. Now accurate information on the agenda is not, however, suggest that the leaders will discuss the Ukrainian question, events in the middle East and the question of reduction of the nuclear threat and growth of terrorism.