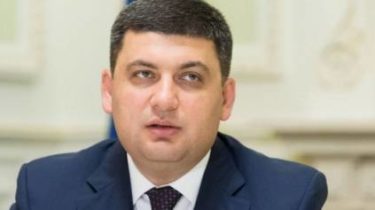 The Prime Minister called on customs officials to work honestly and promised to protect everyone.

Ukrainian Prime Minister Volodymyr Groysman and customs officers are under pressure because of smuggling.

The head of government said during a Cabinet meeting.

“Today we have an insane pressure. It is carried out and on me personally, and customs. With a variety of tools in order to stop us. Today in the environment according to operational data, among the smugglers has such a story: here, wait, wait, will soon agree, they’ll back off. I emphasize that I have no one to negotiate about anything not going. This is for me fundamental position. I kept the pressure before, passes out, whatever the cost,” – said Groisman.

At the same time, the Prime Minister promised that the government will protect every customs officer, who was honestly doing his job.

“We need to survive and to do according to conscience. And who would want to discredit someone, all this will remain in history,” – said the head of government.

According Groisman, recently in the fight against smuggling has made considerable progress. As an example, he cited the auction through the system “Prozora” for the purchase of scanners to customs to which it was planned to spend 1 billion 200 million hryvnias, but trading was able to complete with the amount less than half of 600 million hryvnia.

“The auction ended with real savings provided by SFS, 600 million. That is, we have 600 million less will pay for the scanners, which are planned to pay 50% more. It says about the effectiveness, transparency about our consolidated position”, – said Groisman.

In addition, the head of the government noted that during the first half managed to surpass the 20 billion figures, but there are still “resources that belong to Ukrainian citizens, therefore, should not stop the fight against smuggling.”

We will remind, on July 3, Ukraine introduced to the Parliament a draft law on the criminalization of smuggling. The bill proposes to amend article 201 of the Criminal code of Ukraine provide for criminal liability for the movement of goods across the customs border of Ukraine outside the customs control or with concealment from customs control, committed on a significant scale.