In Kiev broke out in the building of the kindergarten 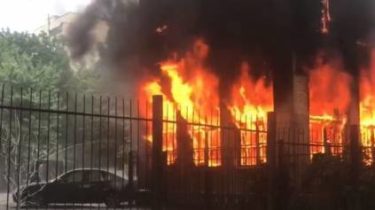 In Kiev broke out in the building of the kindergarten

Recently, the Agency has not acted.

In Kiev on the street Demetrius , a fire occurred in the building of kindergarten.

About it reports Kyiv Live on the page in Facebook by posting videos of extinguishing the fire.

As seen on the record, the two-story building located in the courtyard houses, close to him was also parked car, which was damaged from the flames.

According to eyewitnesses, the building broke out with lightning speed for two minutes the fire had engulfed both floors.

In turn TSN in the capital management of the SSES said that in recent times the garden is not operated and the building was empty.

This Kiev baby!!!…of the fire two men of the guard. Well this is an obvious tip, always leave on the panel of a car note with a phone number!!!

Earlier, on Odeschin lightning caused a fire in the school. The fire happened at night on the third floor of the building.