Militants continue to fire on the front lines, wounded of the Ukrainian fighters. The situation in the Donbass 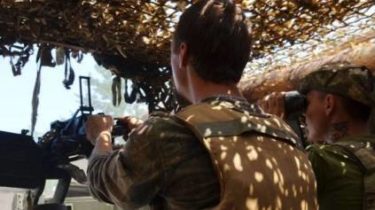 Militants continue to fire on the front lines, wounded of the Ukrainian fighters. The situation in the Donbass

For Wednesday, the militants carried out 17 attacks.

Wednesday, July 11, at the forefront in the Donbass fighters 17 times opened fire on positions of Ukrainian army – wounded one soldier.

“The situation in the area of operations of the combined forces remained controlled. Russian occupation troops almost on the line of contact was violated the cease-fire using rocket-propelled grenades, heavy machine guns and small arms”, – stated in the summary of the press center of the joint forces.

According to the Ukrainian intelligence, was wounded two militants.

For Thursday, July 12 from midnight to seven in the morning, the militants five times violated the ceasefire regime in Donetsk and Mariupol directions. From heavy machine guns and small arms were fired at Ukrainian positions near Marinka, Birch, Trinity and Water.