Opposition to the “Nord Stream-2” and the law Institute of naramata: as agreed by Poroshenko and Duda 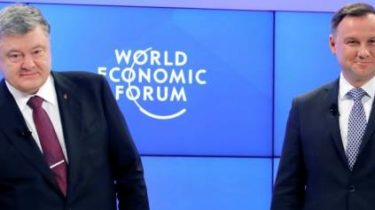 Opposition to the “Nord Stream-2” and the law Institute of naramata: as agreed by Poroshenko and Duda

The presidents noted the importance of coordination in countering Russian aggression.

During a working visit to Brussels, President of Ukraine Petro Poroshenko met with the President of Poland Andrzej Duda.

The heads of state discussed the issues of continuing dialogue in the field of protection of cultural heritage and the perpetuation of the memory locations of the Ukrainian and Polish peoples of the two countries. Poroshenko urged the Polish side to amend the law on the Institute of national memory in part which concerns the interests of Ukraine.

Explanation of the situation with threats trump and the end of the summit. Text online

The presidents welcomed the EU Council decision to extend sanctions against Russia for the next six months. Also Poroshenko thanked for the continued support of Poland’s sovereignty and territorial integrity of Ukraine.

In addition, the presidents also paid attention to coordination in countering Russian aggression in the context of the accession of the Republic of Poland in the UN security Council. The parties also agreed to mobilize efforts to combat the construction of “Nord stream-2”.

We will remind, the President of Poland Andrzej Duda was on a visit to Lutskto participate in the events dedicated to the 75th anniversary of the Volyn tragedy. In turn, Petro Poroshenko in Poland attended the opening of the Memorial to Ukrainianswho died at the hands of the Polish peasant battalions and units of the home Army. After that, the President of Poland called Volyn tragedy of the 1940s, the years of ethnic cleansing, not a war between Ukraine and Poland.