Hot Mariupol direction and three wounded soldiers. The situation in the Donbass 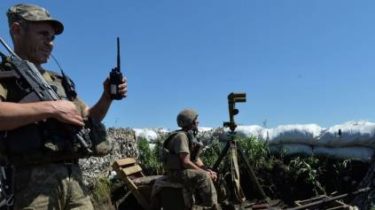 Hot Mariupol direction and three wounded soldiers. The situation in the Donbass

For Thursday, July 12, on the front lines in the Donbas the militants 24 times fired at positions of the Ukrainian military, including twice from heavy weapons. During the shelling wounded three Ukrainian soldiers.

In the press center of the joint forces claim that the situation remained under control.

On Lugansk and Gorlovka areas it was quiet.

At Papanasam and Svetlodarsk areas the militants fired heavy machine guns and small arms on Ukrainian positions near the Trinity and Novoluganskogo.

On the Donetsk direction the militants fired eight times from heavy machine guns and small arms the positions of the joint forces in the areas of Maryinka, berezove, Avdiivka and opytne.

On the Mariupol direction was again “hot”. 14 times fighters fired at the Ukrainian military. Aimed fire from rocket-propelled grenades, heavy machine guns and small arms was conducted at the units near the Water, Pavlopol, Talakovka, Lebedinsky and Pishevik. Fighters for the first time in six days used the Minsk agreements prohibited the 82-mm mortars and fired on the defenders Pavlopolya and Water 14 min.

During Friday, July 13 from midnight until seven in the morning, the militants violated the ceasefire regime in Donetsk and Mariupol directions. Rocket-propelled grenades, heavy machine guns and small arms were fired at positions near Marinka and Talakivka.

According to the revised data of the Ukrainian investigation, two militants were killed and three wounded.