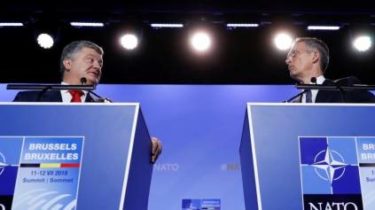 Russia is not interested in ending the conflict in Eastern Ukraine.

NATO countries support the introduction of the UN peacekeeping mission in the Donbas to implement the Minsk agreements and the settlement of the conflict.

About it in interview to the Ukrainian TV channels said the President Petro Poroshenko.

“The meeting is very happy.” Poroshenko said the details of the conversation with trump in Brussels

“I want you again to quote from the Summit outcome document and the Secretary General of NATO. It says here that we have carefully discussed the prospects for implementation of the UN peacekeeping forces in the Donbass. We stress that this will support and facilitate full implementation of the Minsk agreements and an appropriate mandate in order to provide the entire territory of zones of occupation, including the Ukrainian-Russian border. This is the position of NATO countries”, – he said.

According to the President, Russia is not interested in ending the conflict in Eastern Ukraine and is deliberately obstructing the implementation of the mission.

“And, of course, very difficult to explain to Putin why he does not allow to deploy a peacekeeping mission, thus confirming the fact that Russia’s interest in continuing aggression, occupation captured the Ukrainian territory”, – said Poroshenko.

We will remind, earlier the President of Ukraine Petro Poroshenko expressed hope for the successful solution of a question concerning the liberation of Ukrainian political prisoners in the occupied territories and in Russia.