Ukrainians told, who see the next President 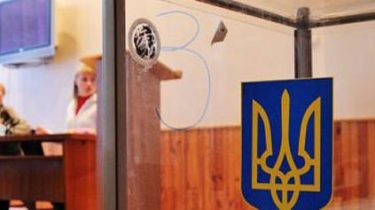 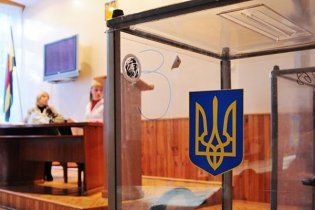 Ukrainians told, who see the next President

The current President of Petro Poroshenko can receive 7,8% of the votes.

As of July 2018, the leader of presidential rating remains Yulia Tymoshenko, for her ready to vote for 17.1% of those who take part in the vote and have already decided on the choice.

This is stated in the research of the sociological group “Rating”.

Second in the ranking was Anatoly Gritsenko (9.7 per cent), in third place — Yuriy Boyko (8.9 percent).

Current President Petro Poroshenko may to 7.8 percent. He also again heads the anti-rating — almost half of the respondents would not have voted for him in any case. 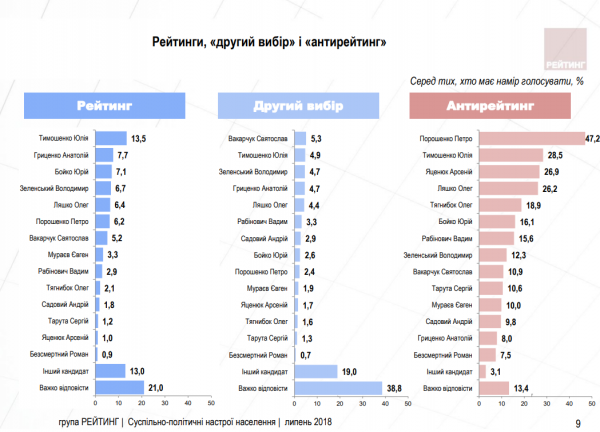 At the seventh position elektoralna preferences were Svyatoslav Vakarchuk – it was 6.6%. After his eighth in the list of Yevgeniy Murayev (4.2 percent). The top ten also included Vadim Rabinovich is 3.7%, and Oleg Tyagnibok of 2.6%.

Among respondents who intend to vote, almost one in five undecided. 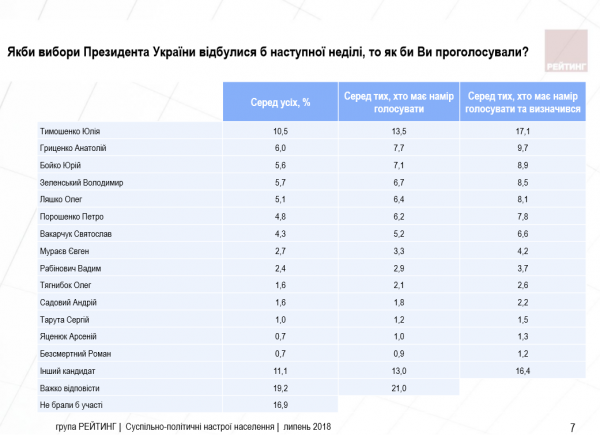 In the “second choice” leadership positions are occupied by Svyatoslav Vakarchuk (5,3%), Yulia Tymoshenko (4.9 per cent). Vladimir Zelensky (4,7%) and Anatoliy Hrytsenko (of 4.7%).

However, the data of the research company GfK Ukraine in July 2018 indicatethat the leader of electoral preferences remains Yulia Tymoshenko (10%), in second place Vladimir Zelensky (7%), and three leaders closes the singer Svyatoslav Vakarchuk (6%).

We will remind, in April, the polling group “Rating” showedthat out of the current politicians in the presidential rating among those who intend to vote or undecided, the leader is the head of “Batkivshchyna” Yulia Tymoshenko (14%), followed by former defense Minister of Ukraine Anatoliy Hrytsenko (11%). The current head of state Petro Poroshenko can get 9% as the leader of the faction “Opposition bloc” in the Parliament Yuriy Boyko and singer Svyatoslav Vakarchuk. Showman Vladimir Zelensky and radical Oleg Lyashko got 8%, the people’s Deputy Vadim Rabinovich – 6%.

According to the results of a surveyconducted by the Kiev international Institute of sociology (KIIS) from 5 to 19 April 2018, the leader of electoral sympathies of Ukrainians for the post of President of Ukraine, the head of the party “Fatherland” Yulia Tymoshenko, which with some lag, by the leader of the party “Civic position” Anatoly Gritsenko, the leader of Radical party Oleg Lyashko and the current President Petro Poroshenko. 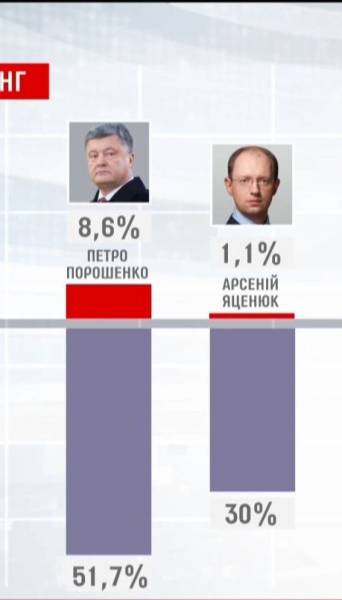