On Shabunina attacked and doused with green paint 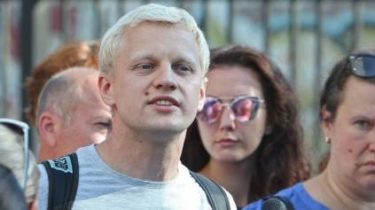 On Shabunina attacked and doused with green paint

During the protest, which was organized by Ilya Kiva, unknown thugs attacked the head of the Center of counteraction of corruption Vitaly Shabunin. It poured brilliant green and used force.

In turn, Kiva called the activist a “prostitute Poroshenko” and urged to put the President on the bench.

Vitaly Shabunin tries to talk to the protesters and to explain to them that anti-corruption bodies do not harm the state, but rather to cleanse the system of corruption. Today at 10:00 at the walls of Specialized anti-corruption Prosecutor’s office the activists intended to hold a rally “Golodnitsky, pack out!”.

Supporters of Kiva are aggressive. They recognized that they were brought here, “a young, handsome guy to fight against corruption.”