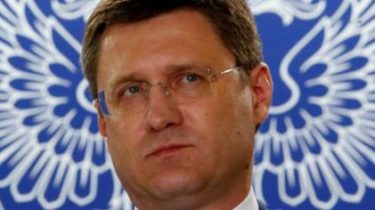 Moscow expects increase of gas transit through Ukraine by 10-15%.

During trilateral talks in Germany, the representatives of Ukraine, Russia and the European Union were discussed, including the issue of debt 2.56 billion, according to the decision of the Stockholm arbitration to “Gazprom”, “Naftogaz”. Moscow to pay off this debt doesn’t, so Kiev started the process of forced collection of assets of “Gazprom” in Europe.

Russian energy Minister Alexander Novak said that the tripartite meeting had touched upon the settlement agreement between Moscow and Kiev and the termination of the seizure of assets of “Gazprom”till the decision of appeal the Swedish court. However, no decisions had been taken. About it writes Reuters.

“Today we exchanged views, outlined the positions of the parties, not to make concrete decisions”, – said Novak.

At the same time, Russia could load transport capacity due to the growth of Russian gas supplies to Europe, which is estimated at 10-15% in the next five to ten years. But to renew the contracts for the transit from Kiev is ready only after settlement of litigation.

“We are ready to extend the current contract, is ready to consider proposals for the new contract, but we must resolve all of the disputed decision before the start of the new phase of relations”, – said Novak.

Yesterday at a joint press conference with US President Donald trump, Russian President Vladimir Putin called a condition of renewal of contract for gas transit with Ukraine, which expires at the end of 2019, the settlement of the dispute “Gazprom” and “Naftogaz” in the Stockholm arbitration.

Novak said that the parties discussed the issue of additional volumes of transit through Ukraine, which can be provided due to the growth in demand in Europe, increased in the first half by 6%.

These volumes were discussed as one of the sources to download the gas transportation system of Ukraine.

“Gazprom” expect that this year, his deliveries to foreign countries may exceed 200 billion cubic meters, and estimated that the volume of transit via Ukraine after the launch of the pipeline “Nord stream-2” may be reduced to 10-15 billion cubic meters.

The sides also discussed the transit rate, estimates which Ukraine has submitted to the European Commission.

The next tripartite meeting is scheduled on Oct.

We will remind, the day gas talks between Ukraine, Russia and the EU stopped for repairs “Nord stream”.