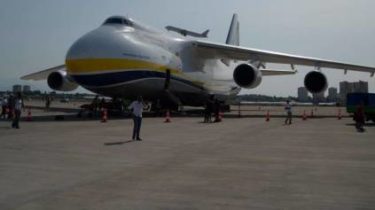 Another defendant is a German company.

The national police of Ukraine opened criminal proceedings against officials of the Federal air transport Agency and the Russian company “Volga-Dnepr” for forgery of certificate of airworthiness of the Ukrainian aircraft “Ruslan”.

About it reported in a press-service of law firm “Ilyashev and Partners”, which protects the interests of the Ukrainian state enterprise “Antonov”, writes “Ukrainian truth”.

“On 17 July 2018, the National police of Ukraine submitted to the Unified register of pre-trial investigations of the criminal offense under part 2 of article 364 UK of Ukraine upon abuse of official position and forgery of documents for renewal of airworthiness of the aircraft An-124-100 “Ruslan”, – stated in the message.

As noted, in the Commission of crime are suspected by officials of Federal Agency of air transport of the Russian Federation (Rosaviatsia) and the German company AMTES, which is included into group of companies “Volga-Dnepr” (Russia).

According to the “Ilyashev and Partners” from-for illegal actions of the Federal air transport Agency and AMTES aircraft An-124-100, an operator which is “Volga-Dnepr” was renewed airworthiness, which jeopardizes the safe operation of aircraft.

“Antonov assured that no company in the world, except for “Antonov”, has no proper experience of continued airworthiness of aircraft of this class in conditions of intense exploitation for a long time,” said the lawyers.

We will remind, earlier Ukrainian aircraft manufacturers have started to restore a large-scale program for the production of aircraft An-158, which was actually suspended due to rupture of cooperation with Russia. Now in the shops “Antonov” there are 10 gliders this machine.