To complete the whole route you want next year.

In Kiev has opened a new ladder on Landscape Avenue that has become a large-scale tourist project. 247 steps have already spent 15 million hryvnia, and the whole idea would cost 90 million, according to a story TSN.19:30.

Half-rotten wooden stairs were replaced with concrete, and then swung to the Association of the most picturesque places of the capital: from Landscape alley you can walk to the Arch of Friendship of peoples. It could be the more pedestrian route of Europe – so says the mayor of the capital Vitali Klitschko. “The stairs at the Mall Landscape is the beginning of a major Hiking route in Europe. From here you can walk to St. Andrew’s descent, Kontraktovaya square, next to Vladimir’s hill and to the arch of Friendship of peoples”, – said the mayor.

Videochristina project: in Kiev opened the new stairs on the Landscape alley

The project has already spent 15 million. Rotten wooden stairs were replaced with concrete, and then swung to the Association of the most picturesque places of the capital: from Landscape alley you can walk to the Arch of Friendship of peoples. About beautiful and healthy – go to TSN. 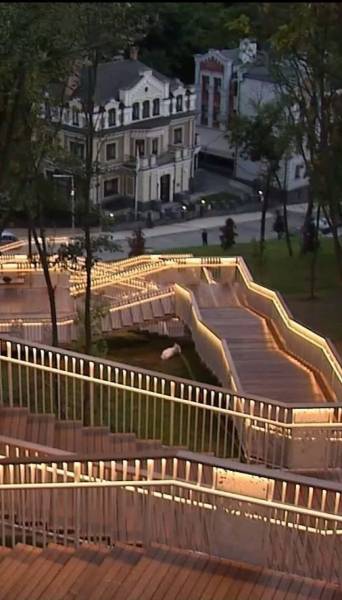 The existing descent Kiev are more than thousand years – steps down lead to the tract, Potters Kozhemyaka. Not without scandal: in April, archaeologists urged to stop the construction, because the excavator seems to be cut of the cultural layer, which can be attributed to the TWELFTH century. Subsequently, however, the earth still poured concrete, and the old stairs were replaced with new. The slopes had to be reinforced with special walls and slaughtered many meters in the ground structures.

New funicular and a pedestrian bridge in the centre of the capital. Klitschko promised “magnet” for tourists

In the end, on the waste land made the alley where there is video surveillance, free Wi-Fi, places to stay and even a dressing room. “Such a modern toilet in every restaurant there”, – says Klitschko. However, about ramps for people with special needs are forgotten, and this has already caused a wave of indignation users on the Internet. The employees of nearby offices rejoice in the discovery of places where you can go for a walk during a break.