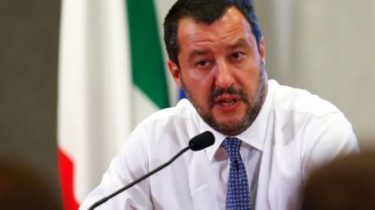 Salvini is also an outspoken eurosceptic.

The interior Minister of Italy Matteo Salvini, who has previously called the Revolution of Dignity “fake”, and the Crimea is “historically Russian”is an outspoken eurosceptic.

This was stated by Deputy Minister of foreign Affairs of Ukraine on European integration Elena zerkal on the air “channel 5”.

“On Monday, July 23, we will meet with the Ambassador of Italy. He is very nice man and he cannot answer for the words of their politicians. Especially considering the fact that this policy (referring to the Minister of internal Affairs of Italy Matteo Salvini – approx.ed.) went to the Crimea and had just returned from Moscow, where, according to information available to us, met with Putin,” she said.

According to the mirror, to expect anything else from a man who since 1990 is the functionary of the “Northern League” may not be worth it.

“In addition, he is on the rise the ratings and it’s really annoying any of his statements. When they won the elections, their rating was at 15%, and now – more than 30% after all the declarations against migrants, when they wouldn’t let boats with migrants to their ports. This means that in Europe there is a problem in functioning as a General EU policy, and with understanding of his fate”, – concluded the Deputy foreign Minister of Ukraine.

We will remind, the interior Minister of Italy Matteo Salvini said he believes Crimea legally annexed by Russia and the Revolution of Dignity in Ukraine a “fake” and “financed”. And at the end of June, Italian Prime Minister opposed the automatic extension of sanctions against Russia. However, the Italian’s protest had not affected the decision of the EU – sanctions against the aggressor country was extended until the end of January 2019.