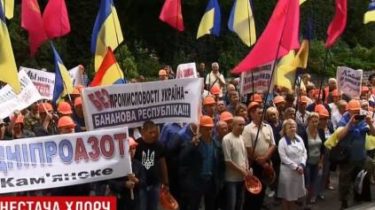 However, workers say that involved only 10% of the capacity of the plant.

The only Ukrainian factory that produces chlorine for disinfection of water, again after stopping, but only 10% of its capacity. His workers held a picket under the Antitrust Committee and asked the officials to help, a critical situation is not repeated, says the story TSN.19:30.

The first tank liquid chlorine for disinfection of water have already arrived in Kharkov. Dniproazot resumed production critical for utility of the substances, but other facilities remain unused – the production of mineral fertilizers and other products of basic chemistry is now unprofitable. All through the price of gas, which is needed to produce steam, needed for technology. In addition, it stops the production of ammonia.

Today PJSC “DneprAzot” to work, but only 10% of its capacity. Today workers picketed the Antimonopoly Committee and asked the officials help, because if the state does not intervene, the situation could be repeated very soon. Employees of “DneprAzot” picketed the Antimonopoly Committee of Ukraine. Their main requirement is to establish a fair price for gas, because the current, in the opinion of the people, a tall and kills the chemical industry in Ukraine. Activists who joined the protests, I believe that high gas prices to blame corrupt officials. “Today, the cost of Ukrainian gas is 1,700 hryvnia. Today the population is also, gas is actually raised to 6500 UAH”, – said the head of the socialist party Ilya Kiva.

After an hour the protesters went representative of the AMC and invited representatives into the room. The Deputy Chairman of the Committee Andrey Vovk promised to consider the resolution of the meeting. “We work within the law and given us authority. As stated in the law, so be it. Regardless of who came to me,” he explained.