The enemy 33 times fired Ukrainian military in the Donbass, but the situation is under control – the headquarters 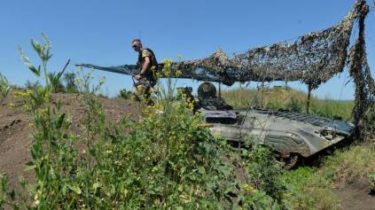 The enemy 33 times fired Ukrainian military in the Donbass, but the situation is under control – the headquarters

During the day, 24 July, the militants of illegal armed groups “DNR/LNR” in the Donbass 33 times fired at positions of the Ukrainian military.

About it it is spoken in the summary of operations of the joint forces.

Beware the fake! Pro-Kremlin media spread a video of the “assault” of the SBU volunteer base in the Donbas

The Water-occupiers applied the mortar of calibre of 120 millimetres, and at positions near Novotroitsk – artillery caliber of 122 mm. With the same artillery fired at the defenders of Lebedinsky. There also used mortars of 82 and 120 mm. Thus, the terrorists fired three times from Minsk agreements prohibited weapons.

Also, the militants twice opened fire towards the defenders of the Luhansk and Pivdenne.

Among the Ukrainian military losses during the day is not fixed. It is noted that wounded one gunman. The situation in the area of environmental protection remains controlled.

Recall, for Tuesday, July 24, militants of the illegal armed groups of “DPR/LPR” in the Donbass six times violated the ceasefire.