Waterfall on “Shulyavka” and water crossings. Five eloquent video of the weather in Kiev Waterfall on “Shulyavka” and water crossings. Five eloquent video of the weather in Kiev

Wednesday, July 25, in the afternoon time Kiev attacked the heavy downpourthat was accompanied by thunderstorm and hail. It paralyzed the movement of the transport paths and flooded underpasses.

TSN.ia gathered five of the most interesting videos during and after bad weather in the capital.

In goloseyevsky district of the capital flooded buses and cars. One user posted a video of the flood from the cabin of the 20-th bus.

Kiev again fills the foul of the weather once again got #golosiyivo Heavy wind lie trees, lightning repeatedly hit the infrastructure, and the road turned into a mountain river. So much water that cars will sink and fade away. The water fills even the buses. The video bus No. 20, a half hour ago.

In the underpass near the metro station “Shulyavska”, water almost knee-deep.

Also in that area, water flows in the transition with such force that it is possible to observe the waterfall.

A little Shulyavka you the tape.

On vyshgorodskaya street the cars are moving slowly because of all the flooded roads.

The downpour was so intense that it is compared to fog.

Incredible rain in Kiev. Wall of rain so dense – like a fog.

The Kiev sea in the city! The road near the metro station “left Bank” flooded! The storm paralyzed the movement on the street! To avoid such puddles, it was impossible. The trucks had almost to swim on the way. And the pedestrian just jumped in this huge puddle. 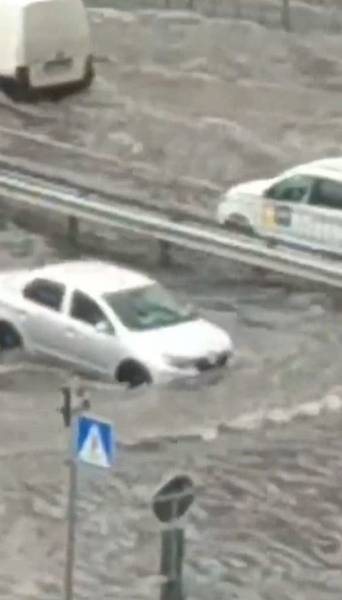